Unfortunately for me the scale tipped in a negative way with the kitchen remodel project.  The reason I decided to do the kitchen is because the walls and ceiling appeared to be in relative good shape as compared to the bedroom.  There was some peeling/chipped paint on the ceiling, but a day of scrapping and mudding to fill the big gouges was not bad.  Day two I sanded and wiped down the surfaces in preparation for paint.  I wanted to be sure I was sealing out what existed, so Home Depot recommended Kilz2 water based as they were we had no idea if the existing paint was latex or oil based.  I wasn’t sure if it made a difference. 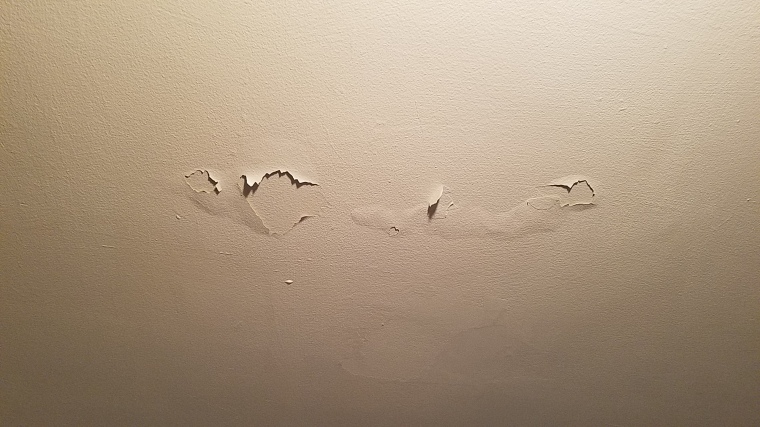 After two days of prep almost immediately when I applied the first quote of Kilz2 the ceiling started to bubble.  Exactly what I was afraid of happened.  I called Home Depot and explained what was happening and was told most likely there were already too many layers of paint and the weight of another coat was just pulling the paint away from the ceiling.  They said my only option was to strip the layers away.  This is where my 4-5 day projected turned into a month.  I ended up purchasing a product called Redi-Strip and apply it to the ceiling and left for the night.  The next morning strips of paint were hanging from the ceiling or were on the floor.  I thought, wow, this is going to be easy.  Not so fast.  About 50% of the ceiling did not give that easy, so the physical strain of scrapping began. 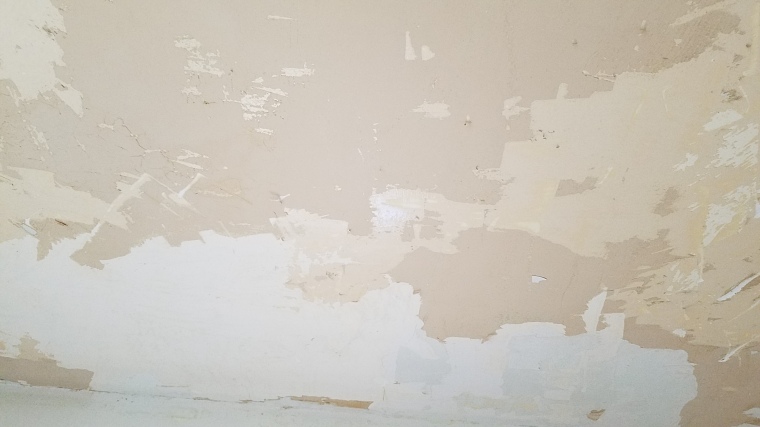 If you assume most people apply two coats of paint, I scraped through at least 4 layers (pink and yellow) to get to what clearly was two more additional colors.  The white you see above is plaster.  The darker tan was on top of the lighter tan, which must have been oil based, as it got gummy and did not scrap off easily.  Since my surface was so rough from the various layers I decided to buy and apply more stripper.  For some STUPID reason I decided I should be pro active and apply the stripper to the walls as I assumed they were also heavily layered and would peel like the ceiling.  I left for the evening.

Dumb, dumb, dumb move.  Unlike previously I was not greeted with layers of peeling paint.  The remaining paint on the ceiling crackled, but the product had dried hard, so I had to reactivate it with water before I could scrap it off.  The walls, under the product. did nothing, but the product had dried on them as well.  I knew I could not paint over the stripper, so I was forced scrap the walls.  In some areas it scrapped easily, in most it did not.  It took 4 days to scrap the walls and ceiling.  I discovered too late that I did not have the right scraper.  At the start of the final day I went and bought a bladed scrapper used to remove wallpaper.  I only wish I had that from day one.  While I did gouge the walls in some areas, the speed in which the blades went through the layers of paint was amazing.  I filled the kitchen garbage can 3 times with layers of paint, but after another day of sanding the patched areas I was finally ready for paint………again. 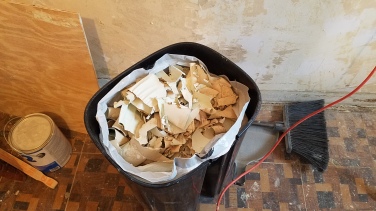 The ceiling took two coats of Kilz2.  After the first coat the ceiling turned the same pale green it turned when I applied the stripper and it started to crack like the stripper.  I was in a complete panic as obviously the product was still active in areas.  I actually called the Kilz technical support line and was told to apply another coat.  I did and left for the day.  When I returned the next day you could still see cracks in areas, but not as profound as after the first coat.  In the worst areas I applied spackeling compound and sanded once dry.  I then applied the actual ceiling paint and crossed my fingers.  Thankfully the paint adhered and proceeded to apply two coats of Kilz2 to the walls.  I also applied the ceiling paint to the back door and base boards, some of which I had to cut new.  I’m loosing track of the number of days I’ve been on this project at this point. 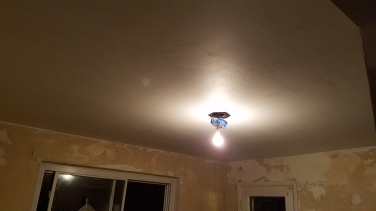 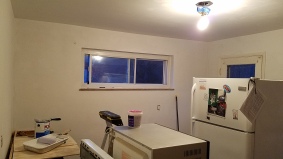 Jackie was called out-of-town the day I was ready to apply the wall color, but I took a picture and sent it to her so she could see it on the wall.  She immediately texted back “Is it pink”.  She had the same reaction I had, the tan was too pink, but I responded that it got darker as it dried.  I completed the room and she returned home. 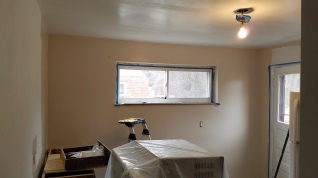 Unfortunately she let it slip that she did not like the color and planned to repaint it after I was done.  I could not let her do that, especially since the base boards and floor weren’t down yet, so I told her I’d repaint.  We had a unopen gallon of the first color, so I took it back to Home Depot and lucked up when an actual representative

from Behr paint was working the counter.  He darkened it as much as possible and I returned to the house to repaint the kitchen.  This was the day I thought I was just laying floor, so that is why I did not leave until 8:15am the next day.  As I said, my mission that day was floors and I was not leaving until they were down.

The change was subtle, but an improvement.