Yesterday my father and I drilled holes and pulled wire to get the electrical rough-in back on track.  I picked the wrong day to forget my cover all and bandanna.  I had sawdust in my hair and down my bra.  Even worst were the cobwebs in my hair when we were pulling and drilling in the basement. 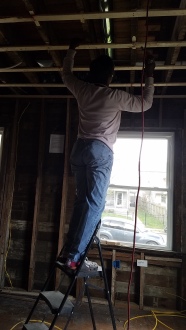 I had hoped the electric rough-in would be complete by now.  Even though my father said this was something we could handle ourselves I had my doubts (really fear of electrocution), so I started this project with contractors.  The first was the company that installed the panel, JTL Electric.  That turned out to be a negative experience, so I turned to another licensed contractor that was referred to me by a friend.  Rick Kinney is a super sweet man, who said he knew “my people”, so he was willing to cut me a great deal.  Unfortunately after three days on the job (2 half, one full), I pulled the plug on him too.  Sweet man, but not the right man for me. On day three I drilled more holes than he had drilled in the two days prior and I hung all, but two gang boxes for the walls on the first floor.  It was at that point that I begin to think the electric rough-in was plausible, so yesterday we picked up where Rick left off.

Earlier that week I placed the remainder of the gang boxes upstairs and got all the can lights and exhaust fans in the master suite hung.  This work is well within my skill set. 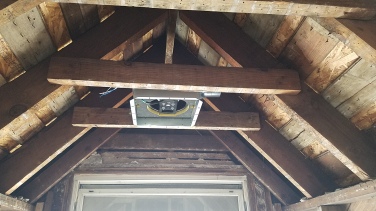 In two days we have 8 circuits pulled. While I don’t fully understand what is a “feed”, “pig-tail”, or why/when to use 12/2, 12/3, 14/2 or 14/3 wire, clearly my father has a firm handle on this and I’m feeling good about our tackling the full brunt of work needed to reach the rough-in inspection.  So far this work is actually easier than the plumbing rough-in, which we’re still working on fixing as we did not pass the first inspection.