Another milestone reached.  I passed, ON THE FIRST ATTEMPT, my electrical rough-in inspection.  Mark, Inspector with IBI Cincinnati, pointed out two items, but neither were of huge concern to stop him from hanging the approved tag.  One was the location of the dishwasher outlet, which I knew had to be moved anyway.  I got the manufacturer specs on the model I selected and they list a specific area in which to connect to power.  6″ is maximum height and mine was set at the height of all my outlets.  Mark also suggested that it be located on the opposite side of the stud.  The other was in one box the uncovered wires were sticking out of the back of the gang box.  I just had to pull some of the slack in the line enough so the casing went through the box at least 3/4″.

Honestly, after the consultation inspection I scheduled, I knew we were going to pass.  My father truly did a marvelous job designing and laying out the electric in my house.  The only area of concern was the length of time it was taking.  My original deadline for moving into my house was June 8, my mother’s birthday.  I’ve now set a new date of July 4, probably still a stretch, but key to making this happen was getting the electrical rough-in done and passed so the framing inspection could be scheduled. Closing of the walls can’t start until after the framing inspection, which could not be scheduled without the plumbing and electric rough-in approved.

My father returned from Florida on May 18.  We started working at the house on the 19th and I had hoped to get the electrical inspection scheduled for Friday, May 25th.  After working 10+ hour days Saturday and Sunday we were still pulling wire and had not started dressing the outlet boxes.  At the pace we were moving the inspection was looking more like the first week of June, so I knew I needed to call in help.

I was getting my hair done and mentioned to my hairdresser that I needed an electrician and she quickly called her electrician Paul McGhee with Truth Electric, a city licensed electrician.  He agreed to take a look at the project and thankfully agreed to provide his service.  While we still missed the 25th deadline, with him working with us 3 days I was able to schedule the inspection for Wed, May 30th.

After two failed experiences with other electricians my father convinced me that our tackling the electric was plausible and he was right.  Pulling the wire, while exhausting, was not complicated.  We started with the easy, straight-forward runs for the outlets (plugs).  What was more complicated were the switch boxes as I, based on code requirements and personal desire, had a lot of 3-way connections and even one 4-way.  I also bought humidity sensing exhaust fans for the bathrooms and these had a certain level of complication.  We actually called the manufacturer who recommended we call an electrician.

This is where having Mr. McGhee was so beneficial.  He took on all the more complicated wiring, exhaust fans, AC disconnect box install, and even added a run for an outdoor motion detection light I wanted on the rear of the house.

6 can lights in living room, but I wanted the two rows to operate separately and from two different locations. Code forced my hall light to become a 4-way connection.

Can lights and ceiling fans boxes easy too. 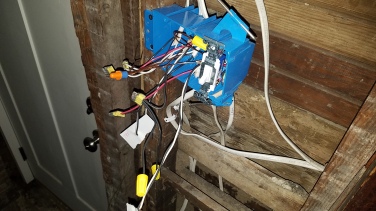 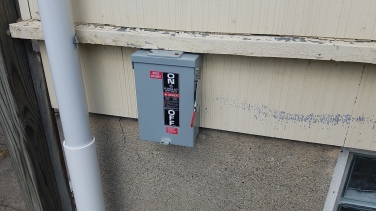 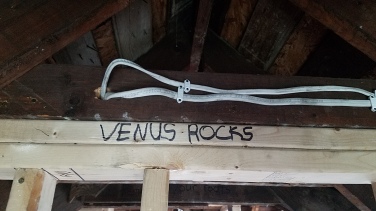 Thank you to whomever wrote this during my House Blessing. I needed that lift during this project. 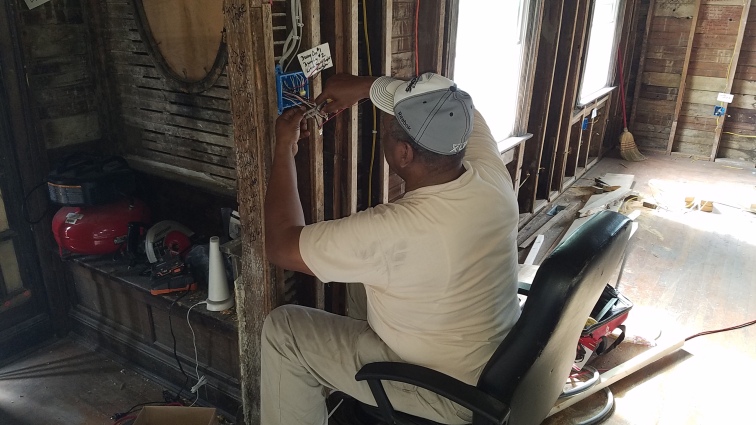 My father also tackling one of the 3-way connections.

Probably the most impressive thing he did was give me working lights in two rooms under the porch in the basement.  JTL Electric told me it would be impossible to use the existing light locations in the ceiling of those rooms.  Well, where there is Truth Electric there is light as Mr. McGhee was able to fish the wires through the original junction box and without drilling holes in my concrete walls gave me light in those two rooms.  My dad and I pulled the wires for the 6 lights in the main part of the basement, but Mr. McGhee made the 3-way switch connections giving me functioning lights in the basement.  No more flashlight toilet runs at night! 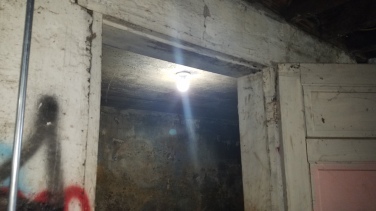 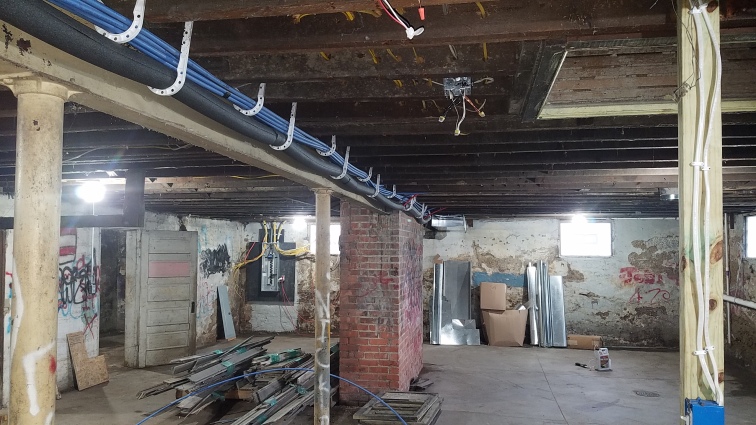 I can’t wait to get the workbench I made last year down there.  I have plans to make my own dining room table and office desk from some of the trees I had cut down from the backyard and master bed headboard from the bead board I found in the basement.  Not to mention I have a boat load of trim and doors I can work on from a cool basement instead of a hot garage at my current house.