I can’t believe I don’t have a picture of what the wall looked like before I started this unplanned project, sorry.  My father was in town for some family graduations; his first time back to the house since move-in week.  He stayed in the guest bedroom and 8 days in he decided the exposed brick wall, only about 18″ wide was unnecessary and that I should drywall over it as I did in the kitchen.  He wasn’t wrong.  I’ve thought the same at times, but for me it would be a project to tackle AFTER everything outstanding was done.  Last Sunday it was moved to top of list.

I stopped at Lowe’s after church and got a great sales clerk who cut the drywall down to the width I needed, which would be the only way I’d be able to get it home in my PT Cruiser.  Like in the kitchen, I nailed one piece to the brick wall and a second piece on top of it.  That entire wall was about 36″ wide and the side that had drywall came away from the brick about 1″, but not consistently.  The top was wider and I had to use some thin strips of wood as shims to make the new drywall meet the existing wall.  I really thought my father was going to do the project, since he made it an issue, but that did not turn out to be the case.  I got both pieces hung, taped, and mud with just verbal instructions from the sidelines.  Fortunately I had plenty of plaster and tape left from the drywall crews to use.

I had appointments out Monday and Tuesday and my father was leaving Wednesday.  I just assumed he would get me to at least paint stage, but that proved to not be the case.  I had entered the “learning opportunity” zone.  I questioned how I would ever be able to create a level and smooth surface after the first coat, but he said I’d be applying three and it would work out.   Tuesday I applied the second coat, trying my best to remember what the young man had done on the kitchen patch, which resulted in minimal sanding and dust.  My father let me know that I did not come out far enough from the 1st coat in order to feather appropriately.  He showed me the technique for applying pressure to one side of the trowel.  He left Wednesday and I felt I had a hot mess I’d never be able to get right.  A full wall is much different from the small patch projects I had been doing.

I put on the third coat (below left) and then decided to sand as I could see grooves in the dried plaster from where I applied too much pressure to one side.  I was also using a 6″ trowel, probably too small for project.  Flashback to the drywall crew that left my house in a hot mess.  Mudding drywall is definitely an art.  The young man that did the kitchen barely left a thimble worth of dust for twice the size space.  I could easily fill a gallon paint bucket.  Since I could feel humps in the wall, I decided to apply a fourth coat of mud (below right).  I knew I’d have more sanding, but at that point I actually felt good about the end product.  The wall was flat and majority smooth. 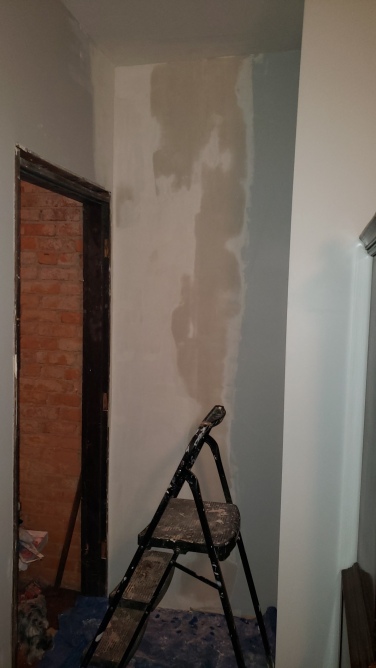 I wanted to tackle the 1st floor bathroom closet door and start staining the built-in for the Memorial holiday weekend, so I was bound and determined to get this wall redo done on Saturday.  Once I got the big piles of dust up, I vacuumed the wall to get the remaining residue up and then applied Drywall Primer; fortunately I had about a 1/2 gallon left.  Following that I painted the ceiling and then put the first coat on of color on the wall.  Unfortunately, with the color I did not have enough paint, so I was forced to purchase another gallon of Passive from Sherwin Williams.  10:41 pm I put a wrap on the project minus the whole house mopping I’ll need to do to clean up the dust tracks from my Crocs.

The wall turned out as good as the “professional” drywall crew I hired, so glad I had the “learning opportunity”, but I have no interest in honing that craft.  I don’t like any aspects of drywall.  Next up in that room is changing the orientation of the bed.  My father had better ideas for that too.  More drywall work involved, but at least it will be small patches in my wheelhouse.  I’ll need help from my electrician, Mr. McGhee, to run the TV and Internet lines to the opposite wall.