Sister Girl with Skills has figured out that she loves working with her hands.  As if that isn’t evident given the massive restoration of my home I’ve been doing for the last two years.  Early in the project I had a dozen plus trees cleared out of my yard.  There were a few walnut trees that were picked up by Randy Wipert with Woodwrights Portable Saw Mill.  I gave them to him with the agreement he’d cut enough slabs for me to make my dining room table.  There was also a huge mulberry tree in the back corner of my lot.  When it was cut it revealed a cool yellow hue, so I asked the company cutting down the trees to save me a chuck of it also, which Randy also cut in slabs for me.  I thought I’d make my office desk with them. 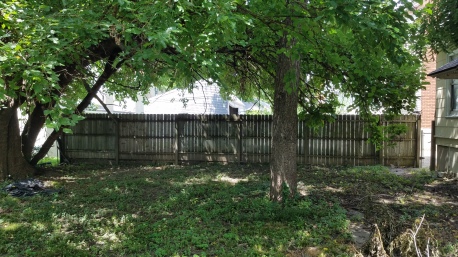 Two years ago the idea of making my own dining room table and desk was more of a romantic notion.  I have built a couple things with cheap plywood, but nothing with real wood that would be meant for everyday use.  Fast forward two years, if I had known I’d develop such a passion for working with wood I would have kept all the logs and just paid Randy for cutting and drying.

When I picked up my slabs, after a year of drying in his shop, Randy mentioned that one of the mulberry slabs cupped (curved, bowl like, while drying).  He thought it would make a nice charcuterie tray.  I took his recommendation and decided to take that slab to the Wood Shop as a first project.  I cut into four pieces of almost equal length.  The rough cut surface is hard to see in this picture, but the surface felt fuzzy, roughed up.  Getting itsmooth is where the real work begins.  I started with the piece on the far right. 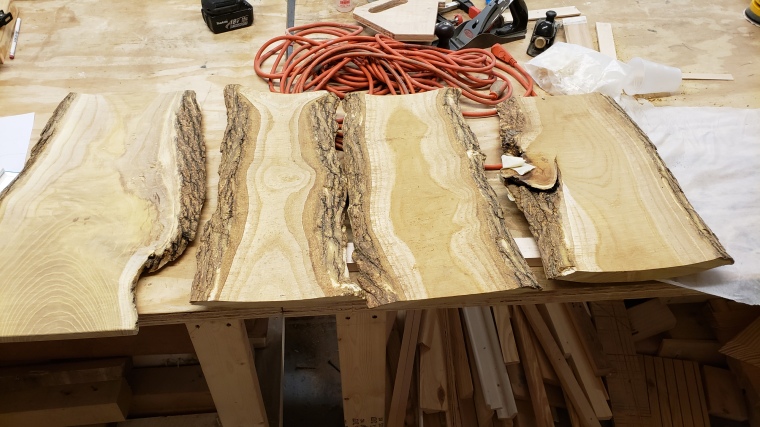 I started this project in August.  The Wood Shop was having a show of projects made in the shop and my board was going to be my entry.  I didn’t make the show because I had to travel and return my focus on finishing the master bathroom.

My first task was toning down some of the live edge, the bark.  Food will be placed on these when finished, so I didn’t want deep crevices that it could embed in.  For that I went way old school and used a draw knife.  I’ve got earphones around my neck because someone else was working on a piece of equipment that made a lot of noise. 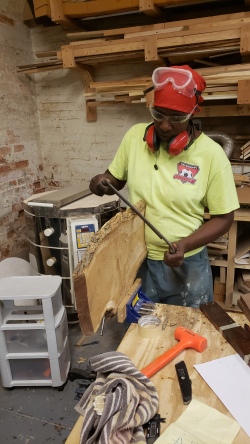 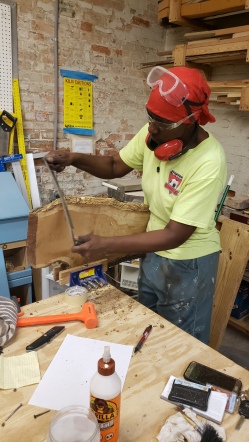 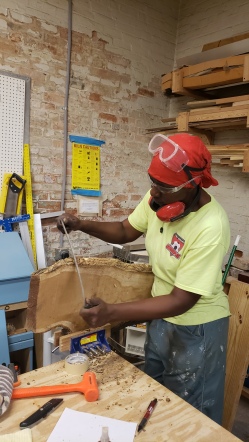 After that the strenuous work began, scrapping the surface until smooth.  There are a lot of motorized tools I could have used at this stage, but I went old school again and used a cabinet scrapper.  This it what was used before sand paper was invented. 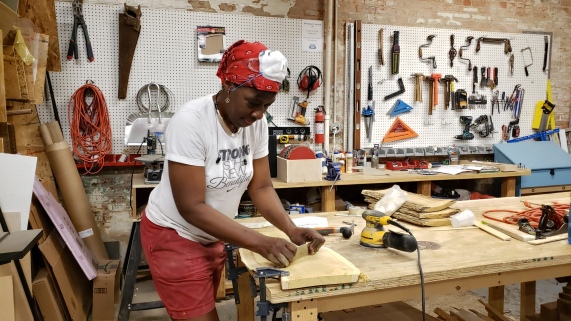 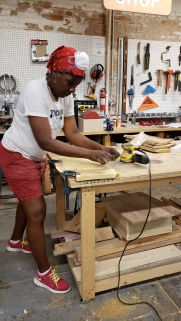 Once I got the majority of the machine tool (saw blade) marks out with the scrapper I did use an orbital sander for the final smoothing.  I also used an electric planer on the bottom of all four pieces to flatten them out so they wouldn’t rock.  No pics of those steps.  This piece had a natural gap where a branch was starting to form.  I used 2-part epoxy to fill the gap; taping the underside, so the epoxy wouldn’t run out through.  The epoxy is clear, but once dried it turned black in the crevice, absolutely beautiful.  I wasn’t expecting that. 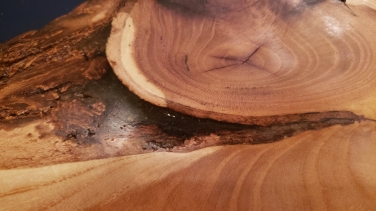 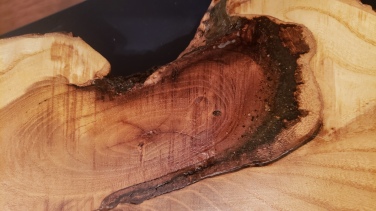 With the orbital sander I started with 80 grit and stepped it up to 120, 140, 320, and ended with 600.  The surface was a smooth as a baby’s bottom.  I put poly-acrylic, 3 coats on the bottom and sides, but on the top I put Watco’s Butcher Block Oil, which is FDA approved oil for food contact.  I applied two coats with a sanding of 400 grit paper in between. 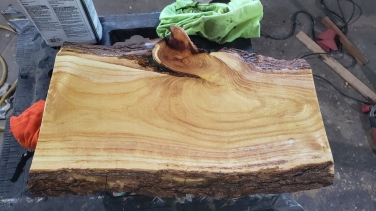 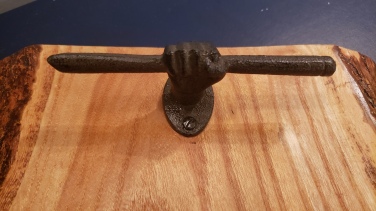 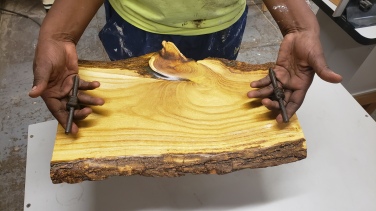 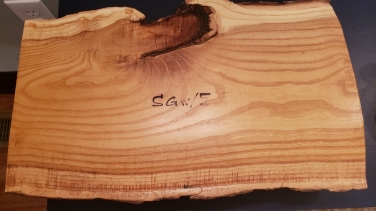 The handles I found on Ebay.  They are cast iron drawer pulls in the shape of a fist holding a stick.  I found the old school screws on Amazon, Rustic Pyramid Head Wood Screws #6 X 5/8″.  No great woodworker creates a project without leaving a mark, so I designed and purchased a branding iron from Gearheart Industry for the finishing touch.  You only get one shot when working with a branding iron and while my practice burns were good, I did not do as well on this first custom piece from Sista Girl w/ Skills.  The feature image up top is my second try on another board.

One of my favorite DIY shows is Salvage Dawgs.  They make stuff out of salvage materials and sell it from their store in Roanoke, VA (I have got to get there to see it in person).  I surf their site for doors and inspiration for my dining room table and I stumbled across their charcuterie boards.  They had one made out of black walnut with handles they were selling for $279, which must have sold out because that page is now gone from their site.  If they can get almost $300, I wonder what I can get for mine?????

I’ve got the second board almost complete, the largest of the four due to its width.  I could not have imagined the beauty that would emerge. The veins and color variations are amazing.  The last two, which are more rectangle in shape approx 2′ x 8″, I won’t work on until after I’ve completed the inside of my house and built my dining room table, unless there is a buyer interested.  As you can see from the ends of the slabs, I will definitely have more wood available.  If you’re interested in one, let me know. 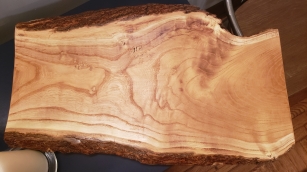 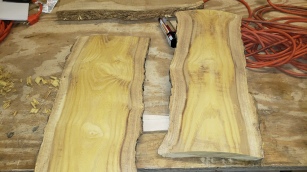 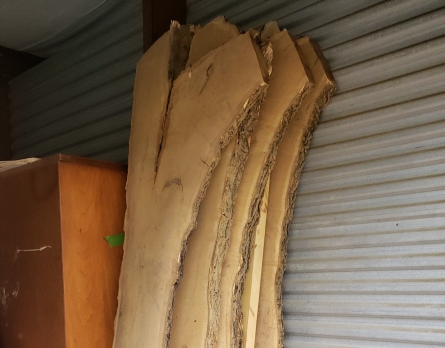