Properly cut rafters I believe was the most important aspect of building my shed.  I messed up on my one attempt and gave up on trying again.  My former neighbor got the job done, but he wasn’t neat about the cuts.  I would have been.  He used a jig saw, all hand cuts.   I would have used my miter saw to at least ensure the lengths were consistent . They weren’t the same lengths, depths of cuts on the angles weren’t consistent.  It was noticeable to the naked eye, but not significant or so I thought.  He joked that its just a shed.  Well………I believe those imperfections were the main cause for my panels not meeting on the corners.  The gaps weren’t consistent either.  The plans did not call for any trim on the back of the shed.  I would have to add to hide the gap. 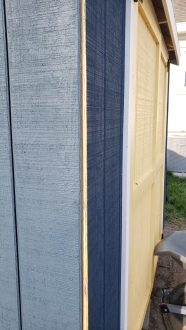 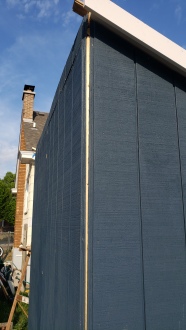 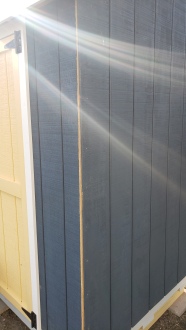 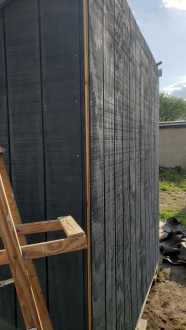 First step was putting the fascia boards on the front and sides.  When I did the front it revealed how crooked the roof sheeting was.  This would not have happened if the Voerhang plates had been installed correctly. The left side extended past the fascia, so since that was a small panel I decided to remove it and push it back.  Doing so narrowed the gap in the back that bothered me when I hung it with my neighbor.  The plan called for two 52 1/4″, 1x4s.  Since I needed to purchase more pieces for the back, I got 10′ lengths, so that could be one solid piece.  I couldn’t see why there was a reason for two pieces outside of the plan listed all 8′ length boards.  Putting the drip edge on top of the fascia makes total sense to me now. 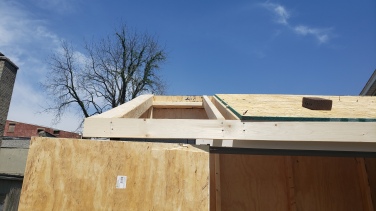 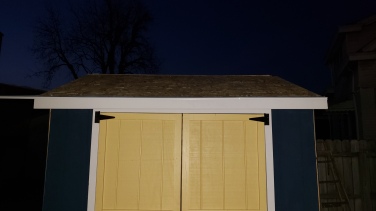 The side fascia had more thought involved.  Adding the back trim meant I was extending the back of the shed, which I would need to account for.  It meant altering the length called for in the plan by the width of the trim board, 3/4″. I cut it an inch longer as the gap at the top was wider than bottom.  The plans called for a 67 degree angle, which is beyond the range of my miter saw.  After the rafter issue I bought a digital angle finder from Home Depot.  Worked like a charm, especially when I applied my straight-edge technique before cutting.

Adding the trim on the vertical sides would mean there would be a 3/4″ gap between the trim pieces at the top.  I wasn’t sure how that would impact installing the drip edge or shingles at the top, so I decided to add a horizontal trim piece as well.  I could have easily installed the 1×4 board cut to the right length, but I knew the slope of the roof was 23 degrees.  I decided to rip the side of the board at 23 degrees also (ok, I was showing off at this point, for who I don’t know).  Once I got the piece installed, it revealed how crooked my back panel install was.  This is where working solo was not wise.  No worries, I used my reciprocating saw to remove the excess with my 23 degree angle as my guide. 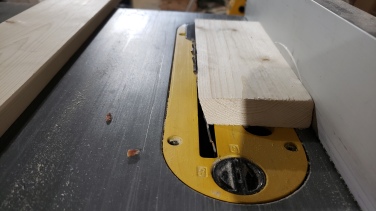 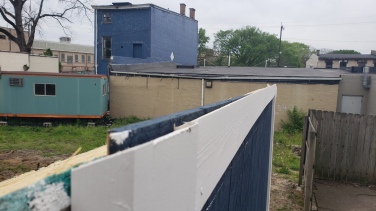 I had already cut the rear side trim per the plans, so that created another gap at the top that probably wouldn’t be an issue, but I decided to create to cap pieces to conceal a crevice I thought would make a great place for bees or hornets to nest in.  At this point I considered myself an angle master.  The top angle was 23 degrees, while the bottom was 67. 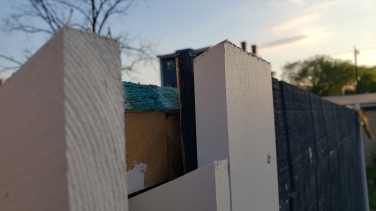 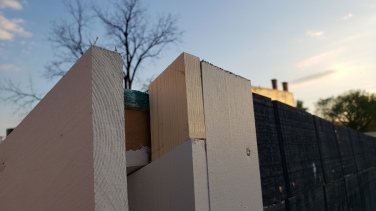 With the sun setting fast I wanted to get the rear drip edge on, so I could jump on the shingles on the next dry day, but the gap between the back siding and roof sheathing was wider than the drip edge.  More audibles would be in store and the shed project would carry over into another week.