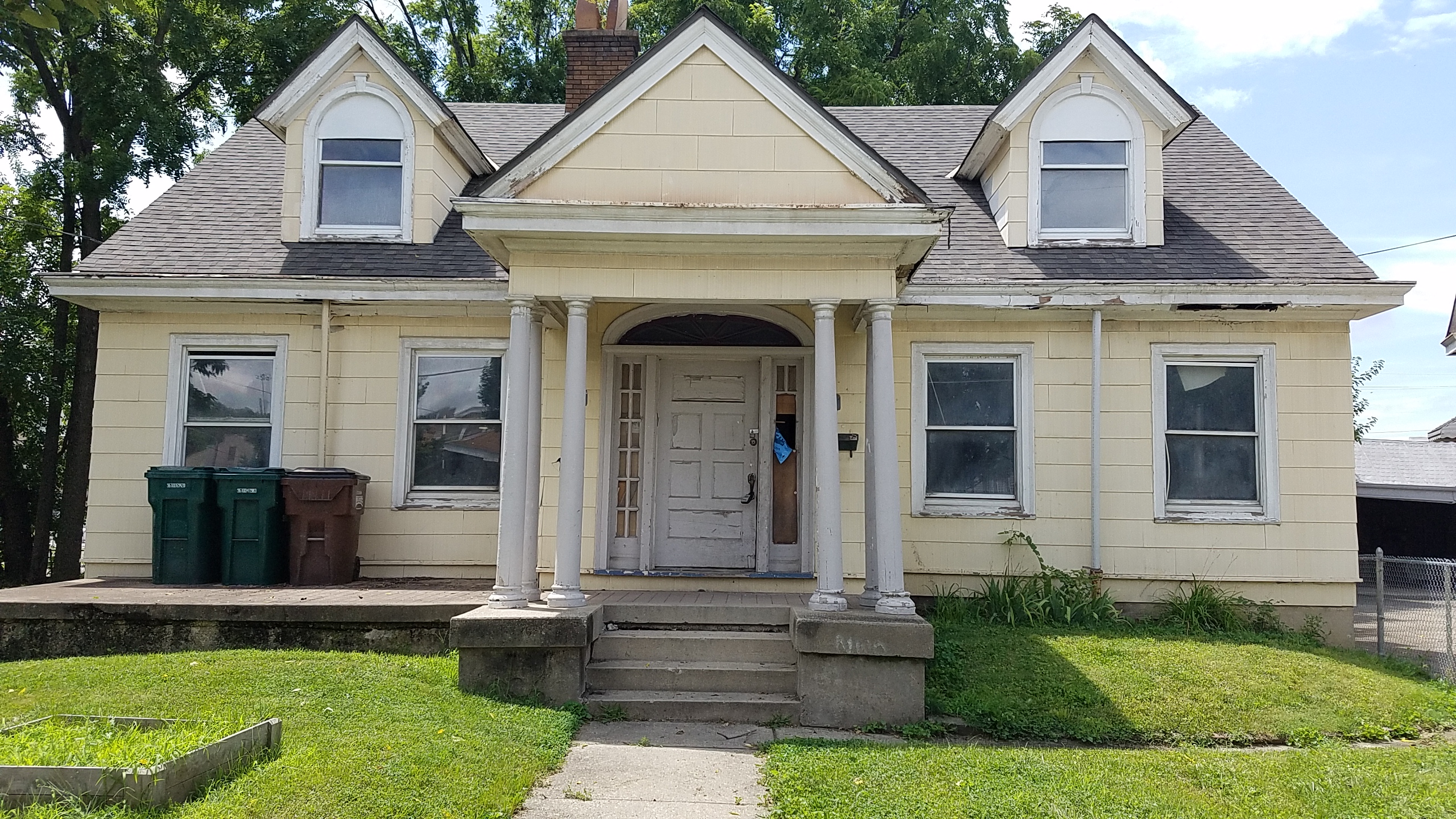 It was love at first site for me and my house.  I paid no attention to how the dormer windows looked from the outside.  I didn’t find it odd that the break between the two window sashes fell just inches beneath the solid structure that filled the top of the window.
During demo the rear large dormer window fell out and it revealed that the solid piece at the top was just a sheet of tin someone had cut in the shape of the curved opening and painted.  It was done to conceal the square window behind it. Clearly the original dormer windows were curved per the moulding on the outside.  But why

was the moulding on the inside, which was clearly old wood, squared?

One explanation I was given by a window company is that the house probably had a fire in the upstairs (true, probably multiple in its life) that did not impact the outside structure; only the inside.  To repair they built walls in front of the damage, which included altering the inside framing from curved windows to square.  The house had square aluminum windows throughout when I bought.  When it was time to replace the windows I was told if I wanted curved windows the cost of the four dormer windows alone would be more the the remaining 20 windows in the house.  I would need to re-frame the inside to accommodate the curve also, which meant losing all the original trim and buying new.  This was so early in the project that I conceded and went forward with square vinyl windows throughout knowing that I’d need to come up with something to hide the horrible look on the outside. 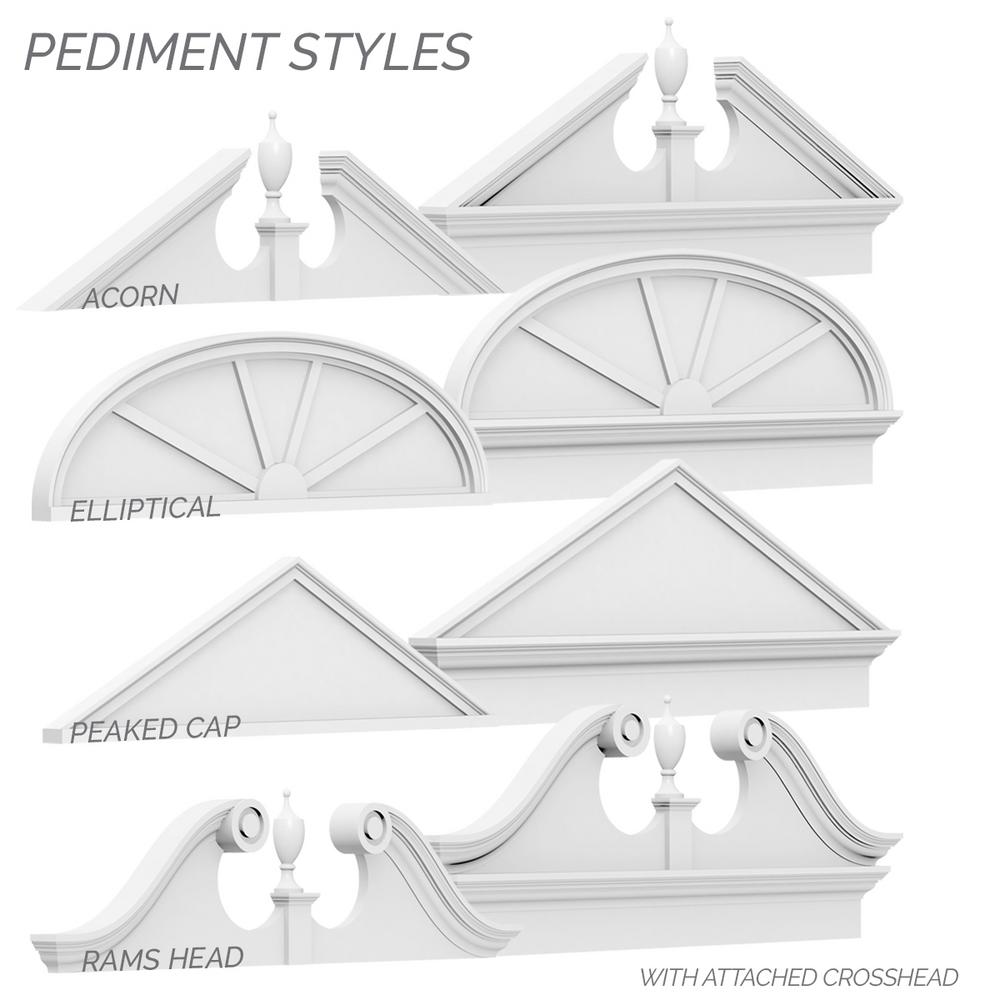 My first thought was to find a better version of the tin that was installed previously. The depth of that piece covered almost half of the window, which meant I was loosing almost half of the light that came through. I hoped I could find something narrower, so I just started typing random descriptors into Google and I stumbled across window pediments. These were meant to be installed above the window, but maybe I could transfer the application.

Further searching led me to the site of Architectural Depot (AD) and a subsequent conversation with one of their sales people. Before I go further I must state that I am a one and done customer of this company.  They are just a reseller of other people’s product, which they mark up heavily.

I explained to the sales person the situation and he had me send him pictures. He understood what I w 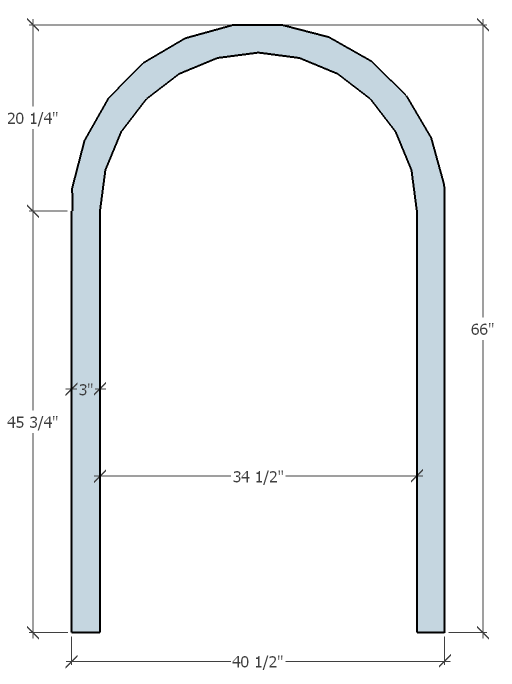 as looking for, I’d need to get a custom piece. He also had a better suggestion, creating a frame around the entire window. He had me give him several measurements and after a couple of days sent me this drawing.  I understood the concept he was going for and thought this could work although it seemed to narrow which I shared with him.  I retook the measurements several times before going through with the order.  Each time 3″ was adequate.  I started this process with them in 2018.  Since the loan from Fifth Third Bank and Guardian did not come through, this wasn’t a priority.  To have these pieces milled out of a plastic material was going to be about $500.

When Center Bank came through and I knew painting would finally commence I ordered the pieces, right when Covid hit.  Their two week ship turned into six weeks.  The worst customer service follow through I’ve ever seen.  They kept blaming Covid, but would never give me a delivery date.  I had to call/email four times before I got a response.  This is when I discovered they weren’t the manufacturer of the piece.  A company called Ekena Millwork (same company whose plinths I bought from Amazon) would be producing them, so I called them.  I got next to nowhere since I didn’t have any production numbers, but they did confirm orders placed on my date, if provided to them should have already shipped.  I called AD back with this information and miraculously my order arrived within the week.  My fears manifested, the frame was too narrow.  The entire time I worked with the sales person providing him all the measurements he needed to create the arch I worked from an open window.  My thickness measurement only accounted for the outer window frame, not the frame around the glass.

I called AD upon the discovery and they took no responsibility for the mistake, citing I provided the measurements. $500 wasted. The frames were cut from PVC foam, nothing special. I instantly thought of The Manufactory’s CNC router. I thought if I could find the material perhaps the guys at the shop could help me replicate them in the correct width. They came to my rescue, including telling me where I could buy a sheet of the PVC foam, Piedmont Plastic, which cost about $200. I had to rent a van to haul it, so another $50. The correct width was 4.25″. With that measurement and the original pieces they were able to program their machine to cut new pieces. From one sheet I was able to get the four arches, but only 7 legs. To create the 8th, I used PVC cement to glue two of the originals together and then ripped it down to the right width. I wasn’t present when they cut the pieces for me, so no pics.

At this point my working relationship with Lyle, painter, is strained. When he started the project (June 9, we’re way past his 3 week time frame) he said he would help me install them. At this point I don’t want him to do anything extra. I decided to figure it out myself and I knew the first step would be getting them primed as PVC does not take paint well based on past experience. I went to the Internet and found several sites and all recommended using an acrylic urethane primer, I used Sherwin Williams’ Extreme Bond Primer. Before applying the primer I sanded each piece with 220 grit, which was also recommended on the sites. To ensure they were clean and free of dust wiped them with isopropyl alcohol.

The AD pieces acted as the perfect install templates, so I was able to practice the angle needed on those legs that would rest against the angled window sill. I decided to use my Kreg jig to make pocket holes around the parameter of the piece. I used 2.5 inch outdoor Kreg screws to attach the frame to the house, but used 1.5″ to attach the legs to the arches after applying PVC cement. The seam between the legs and arch is negligible.

I was able to hang the frames from inside the house and only had to use my new found roof scaling skill to caulk around frame and to repair a piece of the wood trim I broke off by clamping too hard. Looking straight on, the mission of hiding the square window in the curve framed worked. I have no idea how this PVC material is going to hold up, but only time will tell. At least I’ll know how to make new ones if they do need replacing.