This wasn’t priority work, but it’s something I’ve wanted done since I cut down all the trees in the backyard; clean up the cluster in the front.  Gene, with Cheap Tree Service, did some work at my old house removing limbs that broke during an ice storm.  I gave him a call about removing one limb and cleaning up sucker branches from the cluster of trees at the corner of my house.

At my old house, electric was run underground, at this one a line from the pole you see with the stop sign runs to my house and these limbs engulf the line.  I was told Duke Energy doesn’t trim back trees that rest on utility lines when the tree is on private property.  Every bad storm I fear the branches breaking and taking down the line, so I’ve wanted those limbs trimmed back since the electric was turned on.

Fortunately for me yesterday another appointment on his schedule cancelled late and he was nearby, so he gave me a call to see if he could do my work.  I said yes and he and his crew were there in 10 minutes and had the branches and suckers cleaned out and up in 30 minutes.  Very professional crew and he cleared out more than I requested and didn’t charge me more for doing what was really needed given it didn’t take him a lot more time.  Love that mentality.  Cheap Tree Service is a minority owned business if you seek to support businesses in that category.  Licensed and Insured! 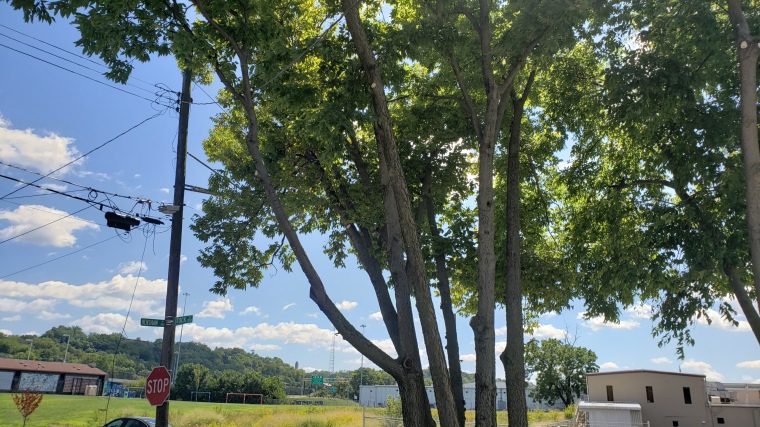 This weekend was supposed to be simple, no strenuous projects.  Cut the grass, paint, and hang the 1st floor bathroom door.  Well I got the grass cut and after that was 7 hours of what has to be the most physically taxing work I’ve done in months.  I moved into the house with just the heat installed.  It was November, so AC wasn’t a necessity at that time.  My entire yard needs to be graded, but the area were the AC unit is going to be placed was particularly bad.  With every rain water would puddle in that area.  With hot weather approaching, instead of tackling the door, I tackled this area.

First priority was getting the drain pipe for the gutter deeper in the ground.  Last March my cousin Cameron and I ran PVC to connect the relocated downspout from the gutter to the original drain in the ground.  He dug down to the top of the clay pipe and we ran the PVC to it.  Unfortunately as the ground settled that pipe became exposed because we didn’t go deep enough.  We should have dug deep enough to remove the first clay pipe link.  That’s what I did Saturday. 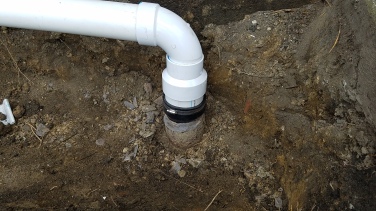 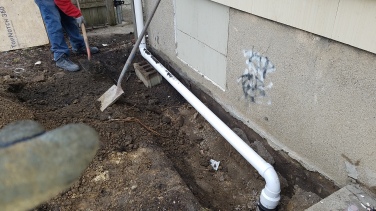 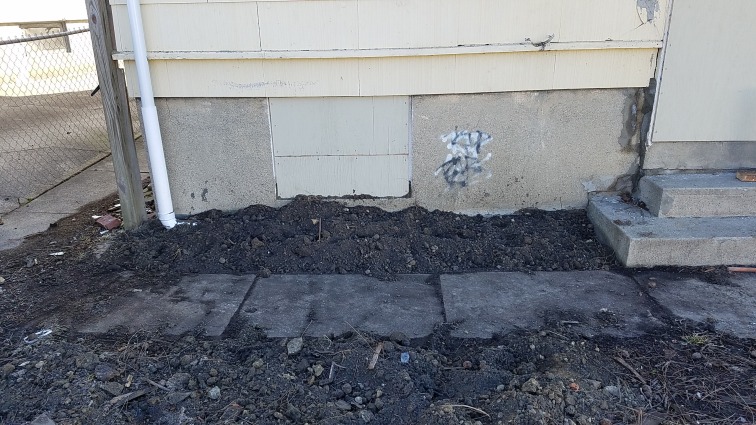 This was one of the days I wish the weather forecast had been wrong.  I got to the original connection and was able to dig down to remove the next section of clay pipe (another 18″) before the rains came.  Digging the trench deeper, adding additional PVC to adjust for the deeper trench, and refilling the hole all occurred during a steady rain. 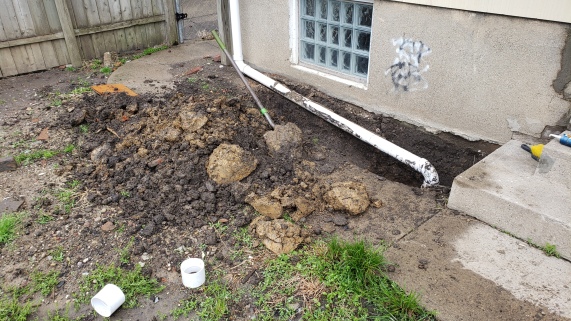 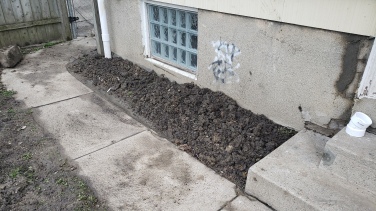 I was a muddy mess, so I don’t have a lot of pictures.  Before refilling the hole I dumped 4 bags of pea gravel in to help with elevating the dirt line.  I finished the project about 10p.  I was whipped and hungry.  I worked through dinner, but I was bound and determined to not have to deal with mud again the next day.  That tyvek suite has been deposited in the trash.

With the pipe fully covered now I could build the pad for the AC unit.  I have never poured concrete, so another new skill has been added repertoire.  After watching a few YouTube videos and talking with my go to handyman, Tom Milfeld, I decided to take this project on.  LADIES, we can do this.  I don’t know how many times I’ve prepared something in the kitchen that just needed you to add water and stir with no trepidation.  Well concrete is no different.  Just add water and stir. 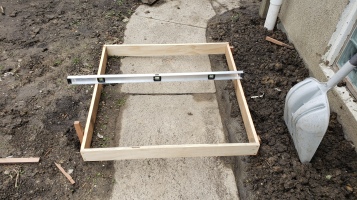 First step was building a box.  My HVAC company had marked the spot with an orange box, so I’d know the location and size.  I had to go on memory because the rain and my digging project eliminated his markings.  Next step was making sure the box was level.  I made a 4″ thick frame, but in order for the box to be level the side closer to the house had to be elevated with stakes making it almost to 6″ deep.  That just confirmed how bad the pitch towards the house is and why I always got a pool of water in that area.

Quikrete’s website has a concrete calculator, so I would know how many bags to buy.  My box was roughly 40″ x 40″ and at a uniform 4″ depth that would need 7, 80 lb bags.  I bought 9 due to the deeper house side.  I got my wheel barrel out of storage, which became my giant mixing bowl and started mixing one bag at a time.  I ended up using 8.

Even though it was Sunday I asked Tom if I could get just one hour of his time.  He arrived on bag 7 and brought the tool needed to smooth out the top.  For future reference I now know not to mix too loose.  He told me the water will evaporate and seep into the ground eventually, but he had to spend more time smoothing it out.  In a couple of days I’ll remove the wood frame.  I’m still sore and stiff, but my house is now ready to receive the AC unit.  Of course I had to leave a mark in the concrete, so in block letters I placed SGw/S – Sista Girl w/ Skills was here.

Tom putting on the finishing touches 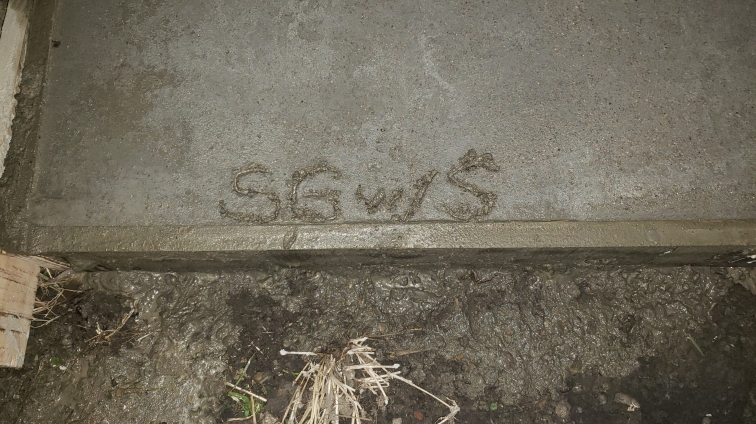 It’s actually been done for a while, but I’ve been pulled away from my house to work on a kitchen remodel, that post is coming soon.  This door had the worst graffiti of all the first floor doors.  I used only the process outline in the YouTube video How To Restore a Wood Door.  I’ve been using Restor-A-Finish color Ebony Brown. Turned out great.  Here is the before: 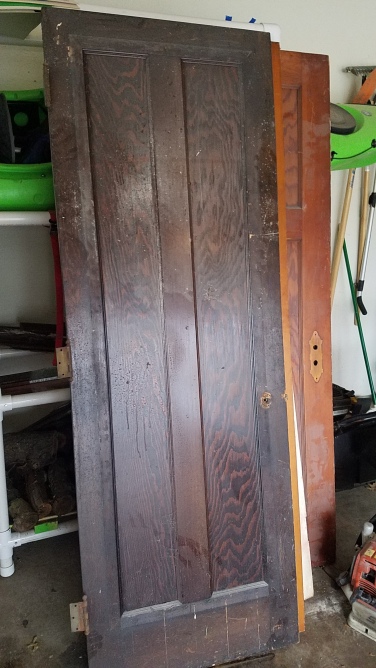 Here is the after:

Today Gregory Forrest Lester took down approximately 15 trees from the side and back yard of my house in preparation for my future garage.  I thought I had hit pay dirt when I contacted a woodmizer out of Indiana who, in exchange for the 5 walnut trees, was going to cut down all the trees for FREE.  Well that turned out to be too good to be true as their plan was to “fall” the trees, which required a street closure permit.  In order to get that they would need to apply for the permit, be bonded, and insured with the city.  They were none of these, so back to plan A, paying to have them removed.  I got several bids in the same ballpark, but selected Gregory Forrest Lester because they were on the City of Cincinnati’s contractor list.  They also agreed to match my lowest bid, which included the grinding out of the accessible stumps.

I’m so glad I went with them.  The two other low bids were smaller operations and would have taken at least a week to clear all the trees.  Their crew arrived at 7am, as stated, and they made quick and efficient work of removing the trees.  They were finished by 2pm.  The crew was super friendly and very accommodating.  There were several branches and debris on the roof and I asked if the young man in the cherry picker could use their backpack blower to removed the and they did.  There was a bunch of out of control grape vines entangled around the two cluster of trees that remain near the front and they removed a lot of it for me.  They also cut out a couple of rouge branches from those clusters.  One of the crew members gave me a great landscaping suggestion, planting Redbud trees along the back.  I’ll probably give them a call when it’s time to tackle the landscaping.

Here’s another Quik video capturing the event: I See the Trees Fallin’ video
I swear my house was smiling, basking in the warmth of the sun, something the rear of it had not felt in years.

I have a strong desire to make my own dining room table (I have these really cool cast iron table legs that are screaming for a wood top), so I’m still allowing Woodwright’s Portable Saw Mill and Woodworker to take the walnut trees.  Randy Wiper, owner, will properly cut the trunks into slabs and dry them out and I’ll get enough for my little project.  If I chicken out on tackling the table I will at least get enough to create a vanity shelf in the two bathrooms. 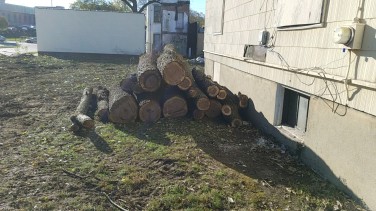 Unlike in Forest Park, the City of Cincinnati does not consider yard waste trash and they only pick it up every two weeks (I’m on the Green Schedule) April thru January.  It has to be placed in special paper yard bags or a dedicated can that is marked yard waste.  Forest Park tried enforcing paper bags for yard waste and that lasted one season.  I guess I’ll have to get use to using them again and today picked up 3 packs of 5 to tackle my first yard work at the house.

My grass was getting pretty long and tonight is my night to set out for pick up tomorrow, so I figured out a way to haul my lawn mower over to the house (bought a ramp that fit on my Cruiser) to cut the grass.  I also took my string edger and backpack blower.  The house has probably not been edged in decades; grass was very overgrown on the sidewalks and curb.  Unfortunately I ran out of string (I didn’t think I’d need a refill), so I didn’t get to do the entire property.  I did cut my yard as well as my neighbor’s, Laverne.  I used the blower to clear the sidewalks and get more leaves up.  My cousin Greg showed up just in time to pick up all the debris, my least favorite part. 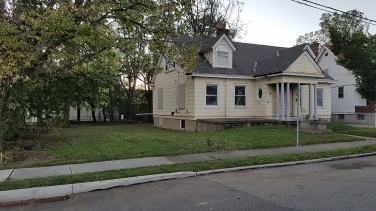 At the closing for my house Joe Gorman, Camp Washington Community Board Executive Director, told the attorney that my house is a signature property for Camp Washington.  I’m on a mission to make sure it lives up to that status.  Getting the yard in pristine condition will be a major part of that.  My father designed the landscape around my current home.  I’m looking forward to designing this one.